The development of the power sector, while prioritizing the production of renewable energy sources, forms a crucial part of Vietnam’s National Power Development Plan. On the 11th of April 2017, the Vietnamese Prime Minister, by issuing Decision 11/2017/QD-TTg on the mechanism for encouraging the development of solar energy in Vietnam (“Decision 11”), formalized some of these objectives. 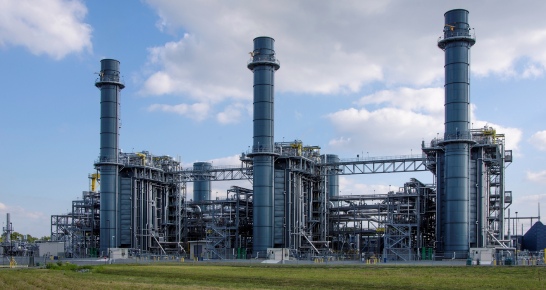 Solar power as a primary focus of the Vietnamese Government

Unlike other alternatives to fossil fuels, solar power is a type of renewable energy that is encouraged by the Government.

The development of alternative sources of energy first began with the National Master Plan for Power Development in 2011 when the Prime Minister issued Decision 1208/QD-TTg. With the implementation of Decision 11, solar energy has gradually become a priority among power sources.

Decision 11 provides an important incentive to encourage the development of solar power projects. Decision 11 mandates that Vietnam Electricity (EVN) and its authorized subsidiaries must buy all the electricity produced by every Vietnamese solar power project. Furthermore, Decision 11 also puts forth some important provisions regarding the price of electricity. Decision 11 fixes the purchasing price at US$ 00.0935/kWh, equivalent to VND 2.086/kWh for grid-connected projects. This price was set according to the exchange rate between VND and USD announced by the State Bank of Vietnam on the 10th of April 2017. The MOIT will determine the price to sell electricity for each power purchase agreement based on the present exchange rate. With respect to rooftop projects, projects must be implemented using net-metering with two-way electricity meters. In a trading cycle, if the amount of electricity generated from rooftop projects is greater than the consumed amount, the surplus will be carried forward to the next trading cycle. Every year, the MOIT will announce prices for electricity produced by rooftop solar power for the following year based on the exchange rate on the last day of the year.

In addition, Decision 11 also states that the MOIT will provide a template for power purchasing agreements. Those agreements will be limited to twenty years, but could be extended.

Other incentives to be clarified

Decision 11 also encourages the development of solar power projects by providing attractive incentives. Those incentives are related to: capital mobilization; import duties; the corporate income tax (“CIT”); and land acquisition and rent. However, most of these incentives are too general and should be clarified. This lack of clarity can be seen when examining each incentive individually.

Second, regarding import duties, Decision 11 provides that with respect to goods imported as fixed assets, solar power projects are exempted from import duties. Besides that, with respect to other materials, components, and semi-finished products that cannot be manufactured domestically, the import duty incentives for solar power projects must be determined in accordance with the present provisions in the Law on Import and Export Duties.

Third, regarding CIT, Decision 11 provides that the CIT exemptions and reductions granted to solar power projects shall be the same as those granted to projects eligible for investment incentives in accordance with effective regulations.

Fourth, regarding land incentives, grid-connected solar power projects, transmission lines, and substations shall be eligible for exemptions from, or reductions on, land levies, land rents, and water surface rents. Those exemptions or reductions shall be in accordance with current regulations on investment incentives. Depending on plans approved by the competent authorities, the People’s Committees of the provinces shall facilitate land arrangements for investors to execute solar power projects. Provision of compensation and site clearance shall be carried out in accordance with effective land regulations.

Therefore, because most of Decision 11’s incentives refer to other laws and specific incentives are not mentioned, the above-mentioned solar power project incentives remain unclear.

The MOIT has drafted a circular related to the development of solar power projects. However, the draft circular does not clarify the incentives, including investment incentives.

Decision 11 is an innovative move by the Vietnamese Government to help it meet its international obligations under the 2015 United Nations Climate Change Conference. Vietnam’s issuance of this decision demonstrates Vietnam’s intention to develop its economy without compromising environmental protection. However, while Decision 11 is a big step in the right direction, some of its important provisions, especially regarding investment incentives, need to be further clarified (or even modified) in order to remove any sources of confusion or disincentives. Otherwise, Decision 11 might only be a symbolic gesture without real effect.

Process flowchart for the implementation of a solar power project 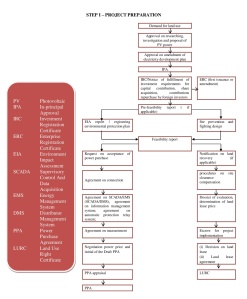 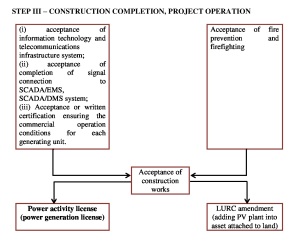 Disclaimer: This article is for information purposes only. Its contents do not constitute legal advice and should not be regarded as detailed advice in individual cases. For more information, please contact us at info@LNTpartners.com or visit the website: Http://LNTpartners.com